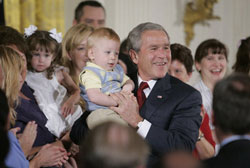 Ok, so why were there kids as the backdrop setting for Bush's remarks following his veto of the stem cell research bill?

Because these kids are not merely cute props, they are emblematic of, and the end product of one particular corner of the so-called 'culture of life' that Bush and his allies are attempting to remake America into.

These kids, in evangelical adoption parlance, are referred to as "snowflake children", so named after the "Snowflake Embryo Adoption" program of Nightlight Christian Adoptions.

For Bush, thousands of couples' frozen embryos are not their individual genetic material to make their own decisions about. No, the cryogenically preserved embryos, to Bush, constitute a unique national resource. One which must be appropriately handled and appropriated, a national resource in a zero sum game tug of war between stem cell research and thousands of potential snowflake children reparented into couples deemed appropriately Christian.

This afternoon, the White House staged an event following the Bush veto of legislation supporting stem-cell research. According to a congratulatory press release issued by Operation Rescue West, Bush was surrounded by "snowflake children."

What's a snowflake kid you may ask?

In IVF, after a couple run through a full course of fertilizing, freezing and trying to implant their own frozen embryos, they may at the end of the process have 'spare embryos' they do not want to give birth to and raise.

There are several possibilities of what to do with these 'spares', one of which recently has been mislabeled "embryo adoption," by another, genetically unrelated to the embryo, couple. Far from adoption, this is actually, more aptly referred to as a process of tranferrence. The children that are the product of this process of embryo transfer to non-biological parents have been nicknamed 'snowflakes.'

These resultant kids are primarily the products of the Christian adoption industry, which sometimes includes in thier most casual materials, requirements such as a "constructive, wholesome, spiritual home environment" of the prospective non-biological couple - all code for a household of the fully-committed Christian kind.

Bush, some churches, and many in the Christian adoption industry consider this not merely the individual goals and aspirations of couples involved in this process, but a matter of national policy, the desired outcome, and the only destination of what they perceive as America's embryo surplus. That's why the children were such a critically important piece of the set design today. No, they're not just cute, no, they're not merely individual decisions of how to deal with the surplus in individual families' reproductive lives. No, these are the living embodiments of the opposite end of the spectrum of possibilities from stem cell research. And thus, they believe, it's a matter of national policy; because there are only but so many cryogenically preserved embryos, and this is what they and Bush want done with them.

Today, Bush opened the curtain a bit on their expectations:

"Each of these children was adopted while still an embryo and has been blessed with the chance to grow -- to grow up in a loving family.

These boys and girls are not spare parts.

They remind us of what is lost when embryos are destroyed in the name of research. The remind us that we all begin our lives as a small collection of cells. And they remind us that in our zeal for new treatments and cures, America must never abandon our fundamental morals."

There's plenty of coded language in there for his evangelical base to pick up on. But the visual with the snowflake kids was key.

These children represent the Bush administration's policy agenda when it comes to the use of remaining cryogenically preserved embryos.

America's storage facilities maintaining these embryos are seen by Bush, key religious figures in his life, and the christian adoption industry, as a national resource, one they have big plans for,  potentially running right over the individual wishes of the couples that created them in the first place.

Think of it as a limited set of options.

Legislatively or legally, this administration and its allies are working to close down all possibilities other than natural unviability and (Christian) "adoption" / transferrence.

Why? All of this takes place in a climate of extreme scarcity of the desirable and top-dollar healthy white infants available for adoption. The domestic adoption industry has undergone massive contraction post-availability of legaized abortion and more readily available forms of contraception. To be crass (I'm an adoptee, I'm allowed) in short, demand is very high, and supply is exceptionally low.

Embryo transfer, despite often being done with remaining preserved embryos after a couple has undergone perhaps multiple rounds of IVF treatments, represent a vast untapped potential of 'supply' for the adoption industry, the Christian "adoption" industry in particular. Not merely supply, but high quality supply that will move in the market, as the supply of embryos was originally created by wealthy, healthy and likely white couples.

Think this is some rare possibility? It's already becoming more and more commonplace, and the resultant children are becoming regulars up on Capital Hill and in the White House. It's a vast untapped market of infertile, and desperate couples and possibly as many as nearly 400,000 embryos held in cryo-preservation here in the US.

The Bush administration, many churches, and agencies in the christian adoption industry want to build what is essentially a funnel: a multipronged narrowing of the options, down to the one, whenever possible. The one option, that is, that leads to christian movement growth, by eugenically doling out embryos as rewards to "godly families" and withholding them from "unfit families", Queers for example.

Through the courts, the pro-natalists are desperately seeking to establish personhood and rights be conveyed upon these cryogenically preserved embryos. For example, see cases such as this one.

This agenda is also being pushed via "wrongful death" suits against IVF clinics, alleging that destruction of the embryos amounts to the clinics and storage facilities "killing". This is but an extention of the prexisting false frame they've worked on for decades now, of "abortion as murder", and clinic workers in the abortion context as "murderers".

Other legal fronts involve the confiscation of personal biological material. Under what circumstances are you not considered the owner of your own genetic material and under what premises can it be taken from you? Cases along these lines are going to ultimately set precidents reguarding the frozen embryos.

Restrictions on the destruction of embryos is another front. There are many efforts underway working to make destruction impossible. Louisiana, for example has created a legal status equivalent to personhood for the material and made destruction illegal.

See this SF Gate article which includes the key quote:

"It bestows on the embryos certain rights," said Dr. Steven Taylor, co-director of the Fertility Institute of New Orleans, a private IVF clinic. "They cannot be experimented on. They cannot be destroyed. If we freeze them and thaw them, it has to be with the intent of implanting them in a woman's uterus."

I've talked about how they view this as zero sum game, every embryo used in research is one less to transfer out. The key  though, can be found in the legal realm.

In  Nightlight Christian Adoptions, et al. v. Thompson, Nightlight (the Snowflakers) challenged the NIH guidelines for the public funding for research involving stem cells, i.e. they argued against the destruction of cryogenically preserved embroyonic material, and funding for stem cell research. Why? They stood to gain by getting access to that material. Destruction cuts down their supply. It's all zero sum game;  every embryo destroyed is one less that Nightlight can attempt to gestitate within the context of a family deemed to be properly Christian.

Finally there's the fourth possibility, stem cell research, which is where many couples would like to pass their unused embryos on to, for many reasons.

Many simply do not want to be forced down the narrow passage of being unable to destroy the surplus embryos and are extremely uncomfortable with the idea of passing them on to another couple, the women of whom will ideally in turn bear biological brothers and sisters to the genetic couple's IVF kids. Or if the genetic couple never had a successful childbirth, the idea of passing on their genetic material which they themselves were unsuccessful in ultilizing may be a horrifying prospect. Other couples would rather the embryos go to help others through research, in hopes if eventually fighting a variety of diseases.

But Bush has refused federal funding for any research other than that only on embryonic stem cell lines from embryos which had already been destroyed.

So of course there were snowflake props, errrr kids, there as the set design today. The day when couples who turned to IVF, with all other options blocked, be forced to turn over excess embryos, for the purpose of creating children for other couples, specifically for Christians and Christian movement growth, is dead ahead, straight down the current trajectory.

Nope, sorry the "Handmaid's Tale" has got nothing on real life these days.

Posted 2006-07-19
Cross-posted to Daily Kos, Booman Tribune
Be sure to view Sabina's elaboration, writing under the name 'stormcoming,' in several comments in this thread.

Translate
Share |
Printer-friendly version
Biblical America:
the social movement that seeks to use the Bible as the sole basis of all governance and social interaction.
BARF:
a resource for all who work to monitor and counter the Biblical America movement.
No white flags:

Individually or socially, never give in to, nor accommodate, this movement's extremist demands.
Search this site
Also from the creators of barf.org:

The Answer is No - Answering Operation Save America in Columbus, Ohio - July 2004